Pronounced “ka·kaw”, Cacao is the bean used to make chocolate but in its purest unprocessed form maintaining all the beneficial nutrients and feel good properties in its highest concentration. The chocolate we buy in the supermarket is highly processed and high in sugars and other ingredients that wouldn’t class it as a ‘healthy choice’.

Chocolate is renowned for making people feel good which is one of the reasons people crave it. Cacao brings this feel good factor but in magnified and with health benefits to your mind body and spirit included.

Ceremonial Cacao – from tree to mug

See also (how to prepare cacao).

Ceremonial Cacao is prepared by hand with deep respect and reverence using pure Criollo (“kri-o-yo”) cacao beans. Ceremonial grade cacao has the highest amount of beneficial nutrients and properties due to the type of bean used and the way it is minimally process by hand.

They state that scientific research shows that Cacao beans have a wide array of unique properties such as:

Raw Cacao beans contain 10 grams of flavonol antioxidants per 100 grams, which is an incredible 10%.  Research has also demonstrated that the antioxidants in cacao are highly stable and easily available to human metabolism.

Magnesium for the Heart and Brain

Cacao is the primary dietary source of magnesium, the most deficient mineral in western civilisation. Magnesium is the most important mineral for a healthy functioning heart. It also plays a key role in producing energy for the neurons in the brain from glucose. So when there is an abundance of magnesium the brain works with clarity and focus.

Cacao is a great source of serotonin, dopamine, anandamide and phenylethylamine (PEA), four well-studied neurotransmitters, which are associated with feelings of well being and help alleviate depression. Both PEA and anandamide (the bliss chemical) are found in abundance in the brains of happy people and are particularly released when we are feeling happy. Both of these neurotransmitters are present in raw cacao in large enough quantities to affect the brain and lift our moods. Cacao also contains monoamine oxidase inhibitors (MAO I’s) that keep neurotransmitters in the bloodstream for longer without being broken down.

There are many types of cacao that you can buy in health food stores and some supermarket but these are usually processed and only have some of the benefits of the flavanoids in cacao bean. The purest and most beneficial form of cacao is ceremonial grade.

Rules for Being Human 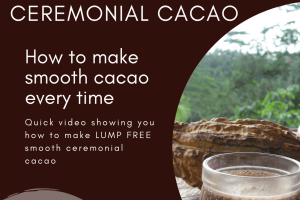 How to Prepare Cacao

Not a member yet? Register now

Are you a member? Login now